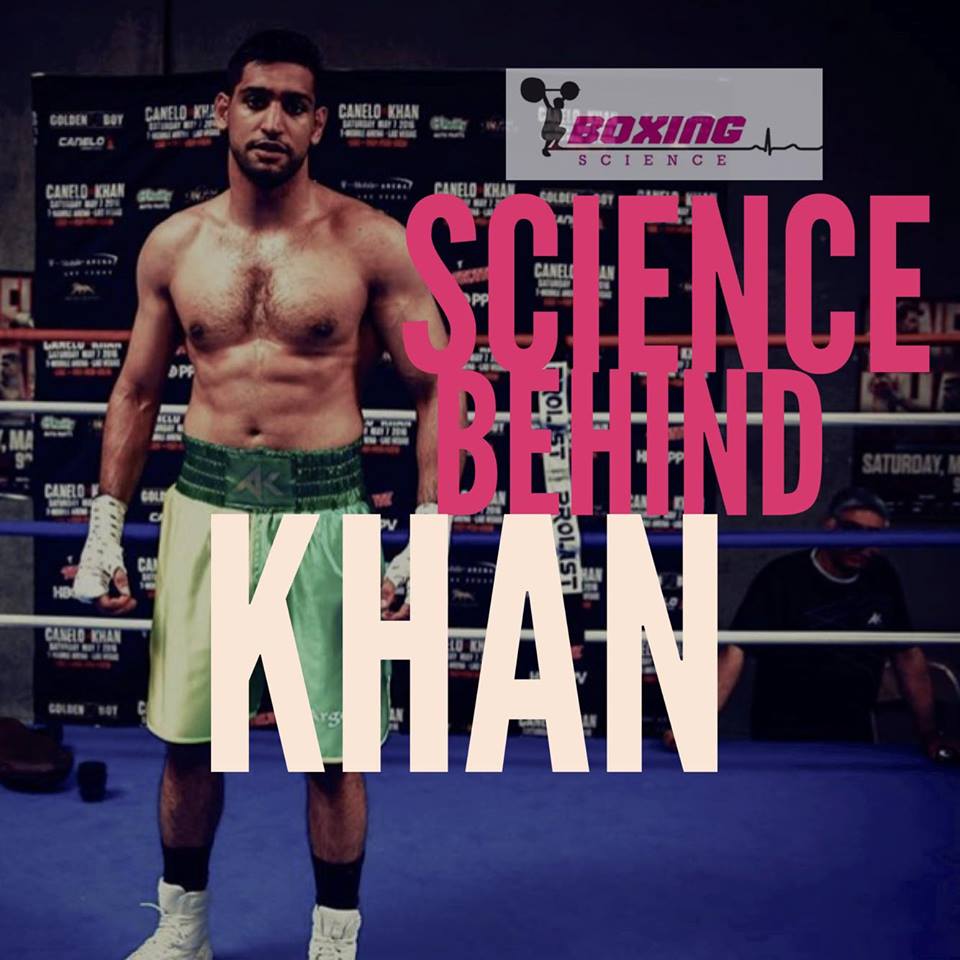 Danny Wilson and Alan Ruddock look at the ‘Science Behind Amir Khan’ by analysing his training regime just a few days before he faces Saul ‘Canelo’ Alvarez.

We also make our ‘shock prediction’ … but it’s based on science!

Amir Khan is just days away from facing the biggest and the hardest opponent of his career so far.

The two-time world champion will be stepping up 2 weight divisions and 8 pounds in body mass to face Mexican superstar Saul ‘Canelo’ Alvarez.

When the fight announcement shocked the Boxing world, we  provided a scientific review on how Khan should be training to prepare for his jump up in weight class.

This article reviews the strength and conditioning training that Amir Khan has been performing in front of the cameras.

Has Khan been preparing the right way to shock the world?

What does he need to do?

Amir Khan has made his name in professional boxing by mostly competing at 135-140 lbs. After winning domestic and world titles at lightweight and light-welterweight, Khan bulked up to 147 lbs.

To be successful at this weight Amir Khan needs to add functional mass.

Doesn’t Muscle Mass Slow You Down?

A lot of the boxing community carry the fear that muscle mass slows hand speed. Khan has no choice but to put on muscle mass.

However, it’s more than just lifting weights. Well-structured training needs to be in place to gain size whilst maintaining speed.

So, What Has Khan Been Doing?

In the video, Khan uses a Keiser Air Resistance Machine. These are often used to encourage speed throughout the movement and are becoming more popular in S&C facilities.

However, the ability to make optimal strength and speed gains are quite limited in comparison to traditional strength training. This is due to the low external load does not encourage maximal force production.

Also, Khan is performing 10-12 repetitions for each exercise, which can be beneficial for muscular hypertrophy. However, this may recruit low-threshold motor units due to the low load and extended time under tension. This can make Khan’s muscles bigger, but not faster and stronger.

Research suggests that 3-5 reps is optimal training for strength and speed adaptations. Too many reps can reduce velocity or activation high-threshold motor units due to fatigue.

Where Has Khan Put On His Size?

We do not have access to Khan’s anthropometric profile so we have to make assumptions based on observation. So, looking at the picture above and analysing his training, it seems that Khan has focussed on bulking up his arms and shoulders.

What does that mean for the punch?

Making the arm heavier would mean that the body would have to produce more force to achieve the same hand speed. If this is not achievable, Khan’s fast hands will slow down.

Khan’s trunk / core seems to be much thicker, this is a good thing as trunk mass in the biggest contributor to punching force. However, we are not able to say how much of this is functional without looking at muscle mass distribution and body fat analysis.

In the video, we see Khan performing, what’s described as ‘upper body conditioning’ for ‘the guns’.

It appears that he’s performing some kind of pulling action for 30 s against some unknown resistance but it looks pretty tough for him so let’s classify it as ‘local (as in upper body) maximal efforts’.

We do this kind of training with our boxers. Except we perform sprint interval training – a whole body all-out effort (Not one that’s localised to the upper body). And we do it to induce peripheral (that is cellular and neuromuscular) adaptations that have a beneficial effect on aerobic metabolism and force production.

So we have our reasons. Like all we do. We have a clear focus for the exercise we are using.

But what’s the goal for Khan? It’s actually hard to tell…

In fact, we’d classify this as no man’s land training.

If the goal is:

To gain size by performing lots of reps to induce hypertrophy then it’s missing a vital component – a large external load.

That’s not to say it won’t have a hypertrophic effect. It probably would.

But the load is too light and the duration too long for it to have any beneficial effect on performance because it’s encouraging activation of low threshold motor units and primarily type 1 (oxidative) muscle fibres.

Not what you need if you’re looking to develop punch force.

We’d characterise this as non-functional mass.

Maintain speed and put on size:

Khan’s major strength is hand speed. He doesn’t want to lose this. So if his team are thinking he can maintain his hand speed and put on size at the same time they’re misguided.

The movement isn’t fast enough and the load isn’t great enough to active high threshold motor units. There’s little chance this will do anything to help stop the decline in hand speed with the increase in mass.

I’ve been asked about this a few times, ‘do you perform any upper body conditioning?’. The short answer, no.

We only use this as part of a circuit (battle ropes) or when an athlete has a lower body injury. Even then, underwater running would be our preferred choice.

This being a localised, peripheral conditioning exercise he’s not actually stressing his cardiovascular system to any great extent.

He’s certainly not going to be in the red zone.

Perhaps you can see that by his relaxed demeanour during recovery. There’s no time to relax and joke when you’ve been in the red zone. Khan has a major task stepping up weight because he’ll need the aerobic conditioning to deal with his extra mass.

As we reported in ‘Too big too soon for Conor McGregor’, there’s very little time to develop aerobic capacity to such an extent that it can support large increases in fighting mass.

Performing localised upper body conditioning certainly isn’t optimal for improving his aerobic capacity because there’s no great strain on his cardiovascular system. To do this he needs whole body, high force training like sprint intervals and high-intensity interval training. 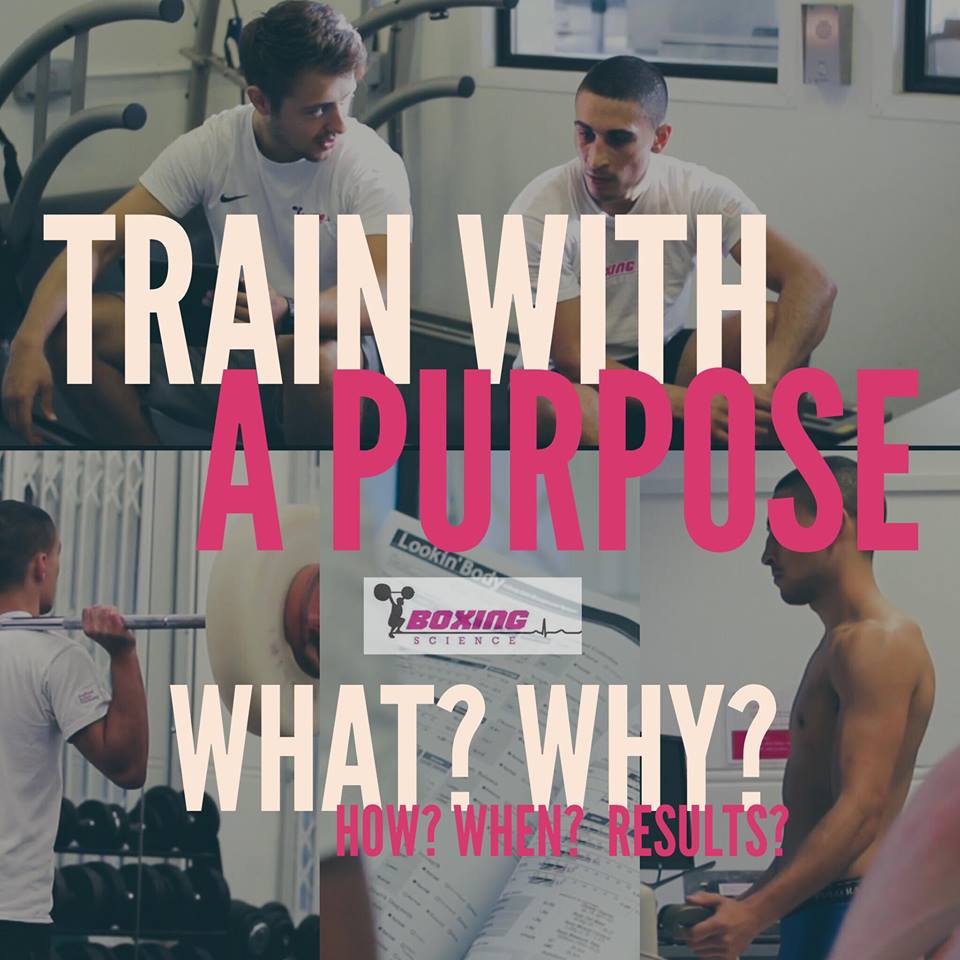 So it’s all a bit confusing for us, and, unfortunately for the cell signalling pathways that will eventually cause physiological adaptations.

You can’t train, hypertrophy, hand speed and conditioning all at the same time. Especially not in elite athletes.

They’re elite because they are very good responders to a particular type of training but when the training signals are mixed, you’re not helping the weaker pathways to adapt.

This means you need laser focus on a specific type of adaptation to maximise the signal and response. Otherwise, it will get noisy. Yes, you’ll get fitter but to a limited extent.

This brings us to our next point. The alphabet of sport science begins with Q. Quantification.

If you’re not assessing you’re guessing. If you truly want to maximise specific adaptive signals then you need to be able to quantify the intensity of exercise in an appropriate manner.

When you can quantify intensity you can start to build a picture of training load, then systematically vary this load to take advantage of windows of  trainability. If you don’t know what you’ve done and what you need to do, you’re taking a stab in the dark, guessing and limiting training adaptation.

So how would we start to quantify the training load of the exercises Khan has been doing with the pneumatic system? Again, not an easy answer. In fact, if anyone has an idea please drop us a line.

But we’re back in no man’s land again, because if the training focus isn’t clear what do you take as your primary intensity measure?

Probably not heart rate for a 30 s interval with a long period of rest; it’s going to underestimate training load.

For sprint intervals, we use speed as the primary outcome measure. And for high-intensity intervals, heart rate with average speed per rep as a secondary measure.

So how does this all fit into the game plan to beat Canelo?

Well, one school of thought says you’re training should be closely linked to your fight tactics. If you have a specific fight plan then you should train in a way that maximises the underpinning adaptations required to execute that game plan.

So if this upper body training has taken a primary role in his approach to training this is how we see the fight playing out.

Therefore, we make our….

With the Canelo’s size advantage and punching force, many people expect Khan to hit and move like Mayweather did in the Mexicans only defeat in 2013.

What would you think about him going toe-to-toe?

Khan’s intense upper body conditioning suggests that he may look to throw a lot of punches on the inside to try to blast Canelo out early. Khan will jump on Alvarez from round 1, he’ll stand and trade with Canelo for the first 6 rounds to try and take the wind out of his sails and limit the effectiveness of Canelo’s forceful hook.
If Khan was training to stick and move, he needs to condition his lower body to get on his back foot and keep his distance from Canelo.

If he does do this… Then his training hasn’t supported his tactics.

So, expect Khan to go toe-to-toe with Canelo, with a stoppage for either fighter in under 8 rounds.

Enjoy The Fight…. The Underdog

With Leicester City becoming premier league champions after being 5000-1 shots, a Khan stoppage might be worth a shot, especially with Science.