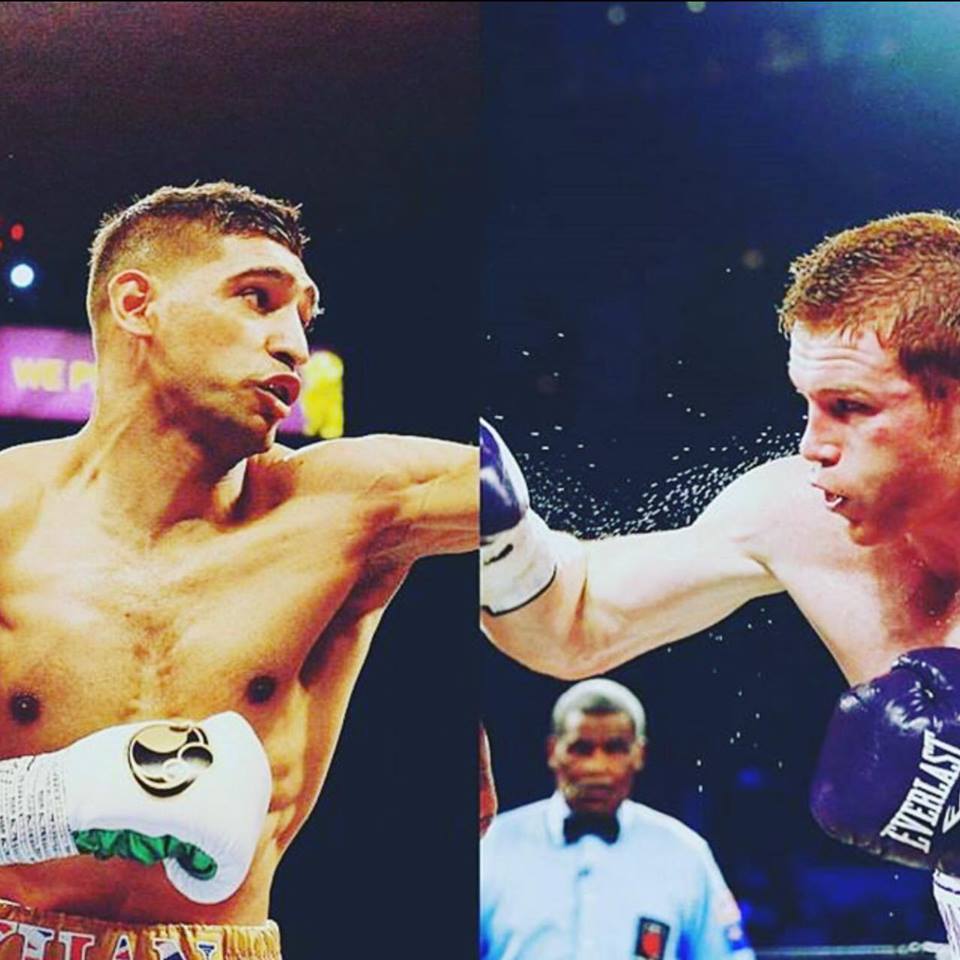 Well, the boxing world has just been bamboozled by the unexpected announcement that Britains Amir Khan will be taking on Mexican superstar Saul ‘Canelo’ Alvarez.

The reason why Canelo vs Khan, scheduled for May 7th, is such a surprise to boxing fans is that it will take place at 155 lbs….. that’s 8 pounds over the welterweight limit Khan has spent just 18 months getting used too.

The news has gripped and divided boxing fans across the world, many wondering whether this is a smart move for Khan? It is a massive fight with huge financial benefits, but how will Amir fair in the fight?

The most obvious advantages for Team Khan are his superior speed and skill. His speed has dazzled previous opponents at lighter weight categories, so if he can transfer that to a performance at 155 lbs, Canelo may struggle.

Canelo’s sole defeat was against Floyd Mayweather, where he struggled to pin the ‘Money’ down over the course of 12 rounds. Canelo was naturally much bigger than Mayweather and was tipped to pull off the upset. However, the Mexican struggled with his movement, speed and counterpunching skills.

Reach won’t be an issue

Although Saul Alvarez was taller than Mayweather (5″9 vs 5″8), Money had a longer reach that helped him keep his distance during the fight.

Although initial thoughts are that Saul Alvarez is much bigger than Khan, if you look at the numbers, he is only 1 cm taller than Khan. Furthermore, Khan’s reach is marginally longer than his Mexican counterpart.

If Khan can use his marginal reach advantage, work in and out of range swiftly, let off quick combinations and last the distance… he may shock the world.

Will Canelo be at the right weight?

Yes, 155 lbs will be more favourable to Alvarez, but he has a massive frame and a lot of muscle mass compared to your typical boxer. When Floyd fought him at 152 lbs, he was only 22 years of age.

Three years later, now 25 years old and only increasing his fighting weight by 3 lbs, will he be ‘making weight’ as easy as before?

Metabolic rates tend to slow down with age, especially with boxers when they gain and lose weight rapidly. Pictured below is Canelo at 167.8 lbs 30 days prior to his fight with Miguel Cotto in November 2015. (Read our pre-fight analysis here)

Canelo losing over 12 pounds in 4 weeks may suggest that he crashes to make the weight…. Khan could capitalise on this….

On the other hand, Khan is moving up weight category by a considerable amount. This means he won’t have to lose as much weight for his training camp, meaning less time spent in a negative energy balance.

Khan can be fuelled up for his training sessions and optimise fitness adaptations. If you are a boxer that struggles to make weight, you can imagine how good this will feel. Khan could gain a lot of confidence from this.

Too much too soon?

The announcement has come as a shock to most boxing fans, but how long has Khan known about it?

More importantly, how long has he been preparing for the jump to 155 lbs?

If he has waited until the confirmation of the fight to prepare for middleweight, he will find it difficult to fill out at his new weight limit.

Typically, the human body can only gain 0.25-0.5 kg of lean muscle mass per week when training and nutritional strategies are solely focussed on muscular hypertrophy. This is mainly with novel weight trainers, with more experienced individuals finding it harder to gain muscle mass as quickly.

It is well renowned that Khan has been doing strength and conditioning for a number of years. So let’s say, for a theoretical example, Khan puts on 0.25 kg a week over the next 14 weeks. That’s 7.7 lbs of muscle, that makes up the deficit between the last fight weight and the 155 lbs limit.

That’s only if his training is solely focussed on muscular hypertrophy. However, we know that a successful training requires a variety of training methods such as running conditioning, technique, speed, sparring etc.

This complexed training approach will be contradictory to optimal hypertrophy adaptations, meaning that Khan will find it difficult to fill out at the 155 lbs weight limit in such a short period of time.

This will affect Khan’s ability to pack the weight back on when refuelling from the scales to the ring, whereas Canelo can be anywhere between 165 and 175 lbs. He did this successfully against Cotto, looking the much bigger than the Peutro Rican on fight night.

Can he maintain his speed?

If Khan is aiming to put on muscle, how is he going to do it? If you are an athlete in any sport, your training has to have positive transfers to competition.

If you are an athlete in any sport, your training has to have positive transfers to competition.

This means that a boxer cannot train like a bodybuilder to put on muscle. They still require a functional approach to improve movement, speed and co-ordination.

This could negatively affect the speed of muscle contractions, and when you couple that with an increase in body mass, resulting in a much slower athlete.

So if Khan looks to put on muscle, his team needs to make sure effective strength and conditioning practices are put in place to maintain speed.

Click here to find out how to gain muscle and maintain speed.

Will Khan be fit enough?

People that would back Khan to win would presumably go for the points victory. This will mean a high work rate, moving in and out of range quickly over the 12 round distance.

Khan will have to be super-fit to maintain the intensity needed to win on points. He has gone the 12 rounds seven times before, so we know that he can do it. Most of these were completed at a controlled pace, except the Maidana fight where he stumbled over the finish line in an enthralling encounter.

Can he afford another Maidana style performance against Canelo?

Also, if he was to focus on bulking up to the 155 lbs limit, would Khan be prioritising his fitness work enough.

Can he take a shot at middleweight?

This will be the most talked about subject in the build-up to May 7th, but something we cannot prove or make assumptions. Khan has been knocked down on 6 occasions during his 34 fight career, with the first coming at lightweight.

He has also been famously knocked out twice, the first against lightweight Breidis Prescott in just 54 seconds, then in a light-welterweight unification fight with Danny Garcia in 2012.

In Science behind the punch, we explained with greater mass, comes greater momentum, resulting in a harder punch.

If Canelo connects, it could be an early night for Khan.

It’s only been a few hours since the announcement, but boxing fans are already excited for what should be a thrilling contest. There are advantages and disadvantages Khan will face.

However, I feel that the jump up to middleweight against the skilled and heavy hitting Canelo might be a bit too much for Khan.